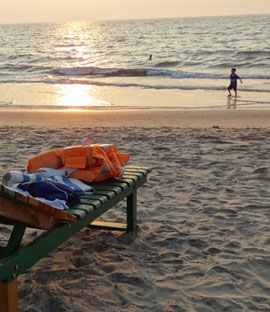 The colonial history of Cherai is well connected with the invasion of Portuguese, Dutch and British. The Portuguese has built a fort at Palliport or Pallipuram known as Palliport Fort in 1503, which is now an important tourist attraction in Cherai. This hexagonal fort remains one of the oldest European monuments in India. There is also a school in the south of this fort known as 'Vyikotta Seminary' built by the Portuguese. In 1577, a printing press was also built by the Portuguese in this school. Some historians claim it to be the first printing press in Kerala.

Next was the turn of Dutch invaders. They arrived in the year 1661 and by defeating the Portuguese they occupied the place. They converted the seminary into a Leprosy asylum in the year 1728. Later the Dutch sold the whole Pallipuram excluding the leprosy centre and some adjoining buildings to the King of Travancore. Now, when British came to power, the whole property came under them. But the Leprosy Centre was continued till 1921 following an agreement between the British and the Dutch. After 1921, the centre was handed over to some missionaries and they started a nunnery and school there, which is still functioning there. Till the British rule in 1945, the place was under the custody of English people.

The history of Cherai will be incomplete, if we ignore to mention the role of the social reformer Sahodaran Ayyappan and an Indian independence activist, Mathai Manjooran. Both leaders started their social journey from Cherai and both became the prominent faces of Cherai.

Sahodaran Ayyappan was a part of the renaissance, which was bought to Kerala in the 19th century by social reformers like Sree Narayana Guru. He was an ardent follower of Guru. He formed the 'Sahodara Sangham' which helped to spread the message of Narayana Guru and SNDP (Sree Narayana Dharma Paripalana Sangham). Along with 'Sahodhara Sangam', Sahodhara Ayyappan also started an exclusive wing for ladies known as 'Sthree Samajam', thus showing his respect towards women He created a mass movement with ezhavas, the majority community in Cherai. In 1917, he organised 'Misrabhojanam', in which he arranged a feast, which saw people from different castes in Hindu community, having food together. This step became a great renaissance movement later.

It was in 1926, Sahodharan Ayyappan organised a trade union, known as 'aadi Vypin Thozhilali Sangam'. This was formed before the Trade Union Act and is considered to be the first trade union in Kerala. This union used to publish a paper known as 'Velakkaran', thrice in a week. Prominent personalities like E V Ramaswami Naykar attended the annual meeting of the union.

Mathai Manjooran was a socialist revolutionary, Member of Parliament and also Labour Minister in the second E M S Namboodiripad Ministry. Born in Chakkarakadavu, a small village in Cherai, Mathai Manjooran was a fearless freedom fighter. In the Post-Independence era, he took part in many political movements in Kerala. Mathai Manjooran is considered to be one of the earliest MP's, who entered the Rajya Sabha, when it was constituted in 1952 and he was also the author of the book 'Prakashathiklekku'.

During the independence era, he fearlessly raised his voice against the British authorities. His involvement in the 1942 'Quit India Movement' was highly appreciable. After independence, he participated in the Vimochana samaram against the first communist party government. Under his leadership, the Kerala Socialist Party (KSP) was constituted in 1947. Mathai was a preacher of federalism and a good orator too. His speeches were appreciated by the then chairman of Rajyasabha, Dr S Radhakrsihnan.

Stay Connected With Us